Woke arrogation of Paradox of tolerance 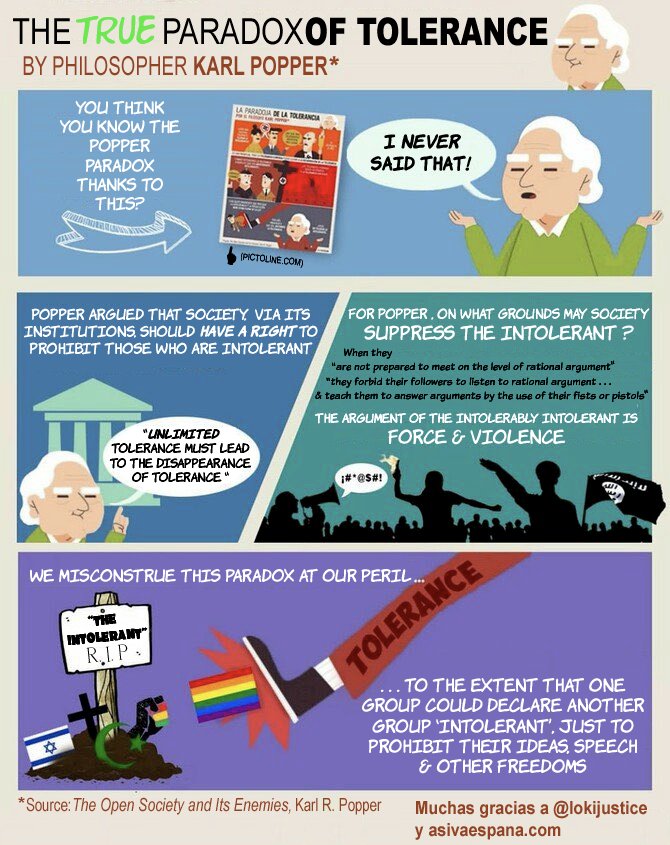 One of the more frustrating things about the deplatforming and activists who cite diversity and inclusion while excusing the behavior by citing the “Paradox of Tolerance” is just how abused and out of context they cite it.

The full passage is as follows [emphasis mine]:

Unlimited tolerance must lead to the disappearance of tolerance. If we extend unlimited tolerance even to those who are intolerant, if we are not prepared to defend a tolerant society against the onslaught of the intolerant, then the tolerant will be destroyed, and tolerance with them. — In this formulation, I do not imply, for instance, that we should always suppress the utterance of intolerant philosophies; as long as we can counter them by rational argument and keep them in check by public opinion, suppression would certainly be unwise. But we should claim the right to suppress them if necessary even by force; for it may easily turn out that they are not prepared to meet us on the level of rational argument, but begin by denouncing all argument; they may forbid their followers to listen to rational argument, because it is deceptive, and teach them to answer arguments by the use of their fists or pistols. We should therefore claim, in the name of tolerance, the right not to tolerate the intolerant.

Now, let’s go through the formulation a little.

Popper specifically states that by rule, an intolerant philosophy not only should not be suppressed but doing so would be unwise so long as they do not have the following properties:

Now, if there is a philosophy that meets most if not all of those points, it is those who are doing the deplatforming, not those being deplatformed. So if any philosophy should be being suppressed under the logic of the paradox of tolerance, it is theirs.